The transformation of an arranged marriage to a love one! 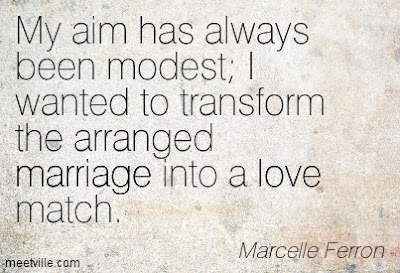 “If I get married, I want to be very married.”
― Audrey Hepburn

Arranged marriages: Lets look at what wikipedia says about it:

Arranged marriage is a type of marital union where the bride and groom are selected by a third party rather than by each other. It was common worldwide until the 18th century.

Wait a second, does that say '18th century'. Yes, it indeed does. The world has moved on, and we, Indians are stuck, stuck in between a combat. A fight of deciding where to go, which side to choose and whom to follow: our old traditional culture or the west.

Anyways, arranged marriages still accounts for an overwhelming majority of marriages that happens on our land. Though we do celebrate love, but only in movies and we are doing that since last 4 decades, but when it comes to applying it literally, it suddenly becomes a stigma!

Love marriages are still considered a taboo in major parts of our society. Anyways, I am definitely not here to make a hue and cry on this institution, but on the contrary, to list down few exceptionally beautiful, few annoying and few hilarious things about an arranged marriage, that helps the two involved fools people creating a love story from an arranged set-up

Let me kind of try to put them in points:

1. Starts from the meeting of the families, with the girl and boy getting minimum time and expected to talk and know each other to the maximum. It is filled with tea, cakes, snacks, food and gap-shap and yes, the girl's family falling for the dude... ehmmm, I mean the boy: his demeanour, his pleasant and nice mannerisms and not to forget, his killer radiant and beautiful smile, that has the power to give a familial Orgy...
2. Generally, in Indian arranged marriages, the final answer comes from the boy's side. Girl's side wait eagerly and gravely for a phone call from them, as if he is the last man alive on the planet. Boy's family, how-so-ever they liked the girl and how-so-much they would be eager to say yes, takes their own time, for the fear of not revealing their desperation.
3. Finally, when the yes happens, the whole ambience change. Everybody behaves as if this is the first ever moment of happiness in their lives. The whole neighbourhood is lightened and brightened with hugs, sweets and celebrations, and shouts and screams and what-not!
4. Now comes the time for the girl to get pampered (my fav part!). She is treated like a princess and I am telling you, if you are in that position, exploit... Exploit this situation as much as possible because it will never come back.
5. And the wedding is done, ending with moms, bride, relatives, everybody howling and crying and yowling on top of their voices, making the poor groom feel like a kidnapper!
6.The girl enters the new house, taking a leap from a girl to a woman, a fiance to a wife, a careless daughter to a responsible daughter in law.
7. Time to take out and put on those lacy sexy lingeries every girl buys in order to seduce her husband. This shopping can also turn to be horrendous, if not taken care of properly!
8. Time to know each other. The girl plays safe, by pushing a bit every day. First day, to try and make a space for herself in his closet. Second day, to change few things here and there in his room and after few days, establishing the fact that the room belongs to both! Its the time they test each other's boundaries
9. They start knowing each other, with love blossoming on the parallel track, with the winds of heaven dancing in between. Its like dating, just that it happens after marriage. And in most of the cases, Sex is already done O_o
10. In between those small arguments, disputes and fights, the life goes on, with a hope of having a 'happily ever-after' Bollywood style kind of 'The End'. The only thing is no one knows, where exactly lies this end! But right they say, 'Marriage is not the end of love, as some might say. Instead, it is the very beginning of an incredible journey…” - Annette Thurmon, A lifetime of Happiness

Guess thats true! Do let me know what do you think: Can arranged marriages be transformed into loved ones.

P.S. How can marriages be arranged? They are made in heaven... Right?
P.P.S. 9th Point: Why to date when sex is already done??? Because it keeps on getting better and wilder with every date! :<>

Popular posts from this blog

September 25, 2015
And... today  I would be writing something really controversial, something that might give constipation to many, something after which I might be thought to be crazy! Anyways, I write what I feel... Being married has many advantages, and the amazing and beautiful ones (uncountable, I tell you!), but one thing that I detest about this institution would be I guess that just after a year or so, everybody around you start asking about your plans for kids, and this lot include your friends as well. After a while, you start feeling as if you were married just for having kids! And this curious question becomes more annoying when it gets transformed to "Do you have any health issues which is preventing you from having a baby?"  And this is something not just me, but many of my friends are also going through. And now, out of compulsion I have started playing with these people who ask me this question by throwing another question at them, why... why 'should'
10 comments
Read more

August 11, 2013
Just finished reading Timepass:the memoirs of Protima Bedi. I am really confused on where to begin with! Anyways, I loved the name "Timepass". It implies that we all are here in this world to do timepass in our own ways.True! So, this book is completely about Protima bedi: wife of Kabir Bedi and one of the most famous of modern Indian classical dancers (of the Odissi style). This book has really jolted me out of so many misconceptions about life, with such a forceful thrust! Before reading this book, I had come across many things about Protima Bedi: the famous and the obvious being the one where she apparently ran nude on a beach in Mumbai!!! As per this book, she was at Anjuna beach in Goa with hippies and everybody was in the same condition and so was she! Somebody took her pics there and made up the Mumbai story. And what else, as usual, she was given the tag of being crazy! Let me brief you about this lady's character first: - A rebel - Insurgent - Audacious
Post a Comment
Read more