Just got to know from a friend of mine about a campaign that Farhan Akhtar has launched. Its called "MARD"... Wowww, he has so beautifully and in such a dignified way, tried to redefine  the conventional understanding  of the word "real man" in our society!! According to our society, Real man is the one who can fight, who is brave and blah blah blah... One of these important ingredients of being a "Real Mard" also includes the amount of power that you are capable of showing on your (or even on other's) woman... Yes, all these things in a bundle makes a man eligible to be called as a Mard! I cannot resist myself from saying again that I feel so ashamed to be a part of such a hypocrite society!!!

Anyways, so I was talking about Farhan Akhtar's new campaign which is also called as "MARD" but the definition of it is so different from the stupid rotten definition... The extension of the abbreviation "MARD" is Man against Rape and Discrimination!

Woooowwww... I mean I am now even proud of being a part of the same society (that I also feel ashamed of) where such men also exist!!! Hats off to this man....

I am copying an article from DNA's website on the same: 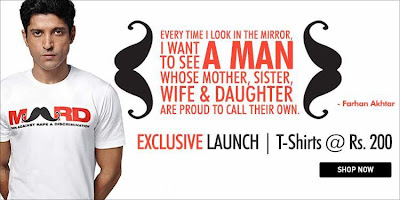 Actor-director Farhan Akhtar's has become the latest celebrity to have launched a social awareness campaign through his initiative MARD, which stands for Men Against Rape and Discrimination.

Actor-director Farhan Akhtar's has become the latest celebrity to have launched a social awareness campaign through his initiative MARD, which stands for Men Against Rape and Discrimination.


As part of his initiative, the actor has aggressively started tweeting slogans on being a MARD from his Twitter handle @FarOutAkhtar. The word MARD means man in Hindi.

@FarOutAkhtar: Change is inevitable. Be part of it. Spread the awareness of what it means to be a real #MARD.
Recently, the actor was also seen performing at a college concert in Bangalore sporting a T-shirt with the MARD logo

Akhtar's initiative has been garnering massive response on the micro-blogging site Twitter with celebrities like Shabana Azmi, Priyanka Chopra, Arjun Rampal and Sonam Kapoor actively retweeting his posts that talk about the real meaning of men.

Here are some of the tweets that have been trending on the micro-blogging site:

@iDev007: You are a real #MARD if you take a stand to protect women

@ritesh_sid: Am so proud of my friend @FarOutAkhtar for his initiative with #MARD. Am right besides you for anything you need to spread the Awareness.

@RjHarshil: Believe :If you are a man who respects women... her rights, her dignity, her independence, her mind, her body, her life... you are a #MARD.”

@rohantandon1: @FarOutAkhtar Take the #MARD message to your schools, your colleges, your offices, your homes. Each of YOU must become catalysts for Change.

Keep smiling and lets take a stand against crime against women!!!
Penned down by shivani singh

A Clash of Kings is the second novel in A Song of Ice and Fire, an epic fantasy series by American author George R. R. Martin expected to consist of seven volumes. A Clash of Kings depicts the Seven Kingdoms of Westeros in civil war, while the Night's Watch mounts a reconnaissance to investigate the mysterious people known as wildlings. Meanwhile, Daenerys Targaryen continues her plan to reconquer the Seven Kingdoms.

If you find any image on this blog that needs to be credited or removed due to any sort of copywrite issues, please do write me @ shivi100@gmail.com and I will be more than happy to do the needful:)

Also, all the work here on this blog is MY property and is copyrighted. Yes, with ALL RIGHTS RESERVED! If you want to use any of it, feel free to drop a mail @ shivi100@gmail.com and I will be more than glad to share it with you:D

New 2 Tweeting but luving it:)